[This post was originally published in Forbes on 9 Jun 2017]

There is a "neomania" -- or a fascination with the new -- gripping our world. While self-driving cars roam our streets right here in Singapore, ominous headlines warn about the looming obsolescence of labour and management.

In a world where stores know that you are pregnant without asking, an algorithm will no doubt be developed that is better at detecting the signs of disaffected employees before managers do.

For those of us leaders who still want to keep our jobs, fear not: there are three important manager functions that even the best software cannot fulfil.

1. Technology can't choose your culture for you

Culture is an emergent property of the organization, tended by its custodians -- management. When we choose to enshrine consensus-building as a value in our organization, we are necessarily choosing to sacrifice individual initiative. This isn't a choice that we can leave to technology, nor should we.

When I spoke to Natalie Vine, Peopleworks Leader Southeast Asia of Flight Centre Travel Group, winner of the 2017 HRM Awards' gong for Best Workplace Culture & Engagement in the small companies category, she shared that they believe that when it comes to people engagement, technology is part of but somewhat secondary when it comes to culture building.

They instead choose to focus on working as a family. This is primarily guided by one of their philosophies "Family Village Tribe." Leaders are very accessible and no-one has their own private office. They relentlessly draw lines of sight from each person's contribution to the company's targets by daily communication and recognition.

Such decisions (and actions) can't be made by a robot.

So you have a clear idea of the values that matter to your organization. The next step is to select a suite of tools and levers that enable you to support and nurture this culture. There is no technology solution to this challenge -- in part because technology is itself a culture lever.

For example, just by having an interview with an employee, an average HR professional has access to a wealth of conversational insights that can influence policies regarding office layout, meetings, or learning and development programs. Technology has a steep learning curve to match the skillsets that is inborn to all of us.

Tower Transit Singapore (TTS), winner of the same award above in the medium-sized companies category, also spoke to me for this article. Glenn Lim, Group Communications Director of TTS, shared that they were "extremely deliberate about culture building." Being in an industry that has traditionally been a late adopter of technology, there were plenty of opportunities for improvement.

However, the team resisted the urge to reach out for the latest grab bag of tech solutions. Most of the culture levers that were instituted were in large part non-technology-related. 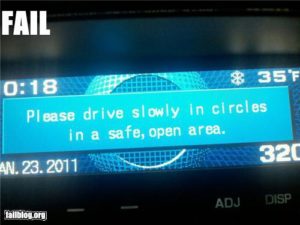 Oops...#GPSfail
3. Technology can't offer guidance to team members, you can

It's been a couple of years since Eugene Goostman, an AI chatbot fooled the world into thinking that he was a 13-year-old Ukrainian boy. Since then, though chatbots are mushrooming on various chat platforms, we are no closer to seeing a conversational chatbot with potential for productivity in the HR workplace.

One of the titans in technology, former CEO of Intel Andy Grove, wrote about the highest leverage activity any leader can engage in: training. If a manager spends 12 hours preparing training for 10 team members that increases their output by only 1% on average, the result is 200 hours of increased output from the 10 employees (assuming each works about 2,000 hours a year).

Twelve hours in exchange for 200. If the quality of that training goes up, the exchange rate gets even better. Such guidance is difficult to outsource to machines. The Center for Creative Leadership found that effective people development abides by a "70/20/10" model: of the total time spent on guidance, 10% comes from formal coursework and classroom learning, 20% from coaching and mentoring, and the remaining 70% from performing stretch assignments.

Leading with flexibility to ensure a smooth return to office (RTO)

Empower managers, so your people can thrive